Nestled in the outskirts of Philly, this quaint little establishment prides itself on one word, and one word only. BonChon!!!

But hold up, stop, wait a minute!?! before we go ahead and associate the word with Café Soho, let us first define what this peculiar term means. For those that are unfamiliar with it, BonChon is actually derived from a South Korean-based fried chicken franchise restaurant known as BonChon Chicken. BonChon, in its simplest of forms is a fancier, more animated way of referring to korean fried chicken. Many local restaurants not affiliated with BonChon Chicken, including Café Soho, have manufactured a similar generic recipe of korean fried chicken that closely resembles that of its original. But just like how we refer to tissues as "kleenex" or bandages as "band-aids", korean fried chicken is generally known as "BonChon".

So now that we’ve gotten the definition out of the way, let’s begin our journey to zion…the very first mistake one can make when stepping foot into the café after a very long night of wild and barbaric fun, is to ask the cute hostess how they make their chicken. I had the decency and ignorance to ask such a question on a separate occasion in hopes to strike up a conversation that would hopefully end with an exchange of numerical digits...waiting and waiting for some type of reciprocation, the response I received wasn’t what I had expected…it was like a deer in headlights in the dead middle of the night. Frozen with astonishment, she replied “you’re kidding right?” and all I could say was ummm yea surrrre. She snickered and walked away. After taking a seat in disbelief, the alcohol circulating through my body started to rationalize my confusion…a forbidden question that should have never be asked! The recipe is an inside secret. Lesson learned. So I’m forewarning you now… 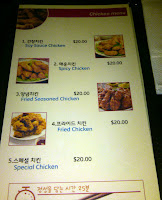 Once the awkward exchange settles, you'll quickly stumble upon their menu that consists of several dishes which doesn’t really stir any interest. You came here for a one purpose and one purpose only. Straight to the poultry section you go and soon those salivary glands will shift in high gear. A choice of spicy, soy sauce, fried seasoned, plain fried, and special chicken, all cooked with a certain personality…hmmm. Undecided? Well, go for the “half and half” and you’ll get 10 pieces of one flavor and another 10 of something else, all for 20 bucks. I for one am a suckerrr for the battered soy sauce wings burnt to a golden crisp. 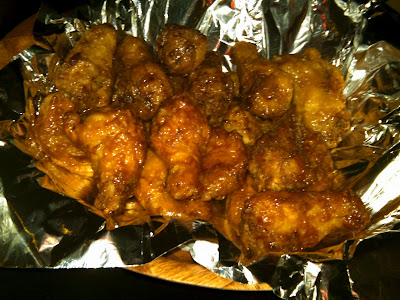 Once the order is made, you’ll be spending a good 10-20 minutes waiting for the wings to come out HOT in a foil-lined basket. After the first bite, you’ll start to understand the true meaning of euphoria. Chow down some more with no shame and wash down that esophagus with an ice-cold glass of blue moon…or better yet, a pitcher to hose down the rest of your crew. Sooner or later you’ll look up and take a breather, toss up a few cubes of pickeled radishes to cool down that inner temp, maybe even scope out the scene, people watch, or catch that gaze from the hostess you were talkin’ to earlier, ha! Time check…2:45 am. You finish off the rest of the crispy sauced wings and glance down at the basket you’ve just pummeled through…go ahead, you know you want to. Leftover chips of deep-fried flour or paper-thin skin that broke off. Nom nom nom. 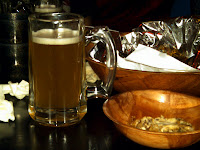 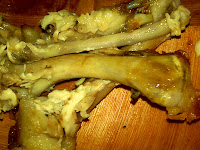 In complete satisfaction, you look down at your hands and notice that you’ve only used one hand. Now that’s skill! Or maybe it’s the Filipino in me (I recall my mom telling me to eat wings with only one hand when i was young chap). I’d like to see you try eating wings with one hand!!!

Ahhhhh, you’ve never felt better. Like a fellow customer once said, you know this place is AMAZING when you can smell the residue of the wings on your fingertips an hour later and want to eat your fingers. After a very loOong nite, you crash when you get home, only to find yourself wake up an hour later gnawing at your hand for some odd reason…

(4 out of 5 Drunkeats)
4 simply because of my curiosity to taste
the original from BonChon Chicken,
otherwise this would have been a 5