A clear, hot (but not humid) summer day in NYC requires you to be equipped with a few things:

- comfortable sneakers and cushioned socks
- Metrocard
- camera or camera-phone
- open mind
- cash
Bring these things along, and you'll be prepared for anything that may cross your path or for any path you may want to cross. Being a "tourist" in the city makes for an interesting escape from the daily monotony of a desk job. For example, only in NYC can you find Minnie Mouse walking down 42nd Street so nonchalantly as if it were normal, backpack in tote and shopping bag in hand.
A short stint in the Reading Room at Bryant Park to relax the mind and body, as well as catch some shade from the rare trees in NYC, does well for any tourist. The concrete jungle's towers
are a reminder that the essence of nature are few and far between. 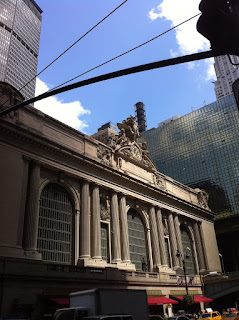 Our next stop was Grand Central Station. Of course, on a food journey, the goal is to see what the offerings were. The Dining Concourse on the lower level offers a wide variety of great eats for all the customers that the bustling train station services. One of the most overlooked vendors down there is the Golden Krust Patties. Their stand has no fancy awning or colorful billboard. It's the awesome aroma that wafts in your face as you walk by that is its calling card. Although we didn't get to taste anything today, on a previous visit, a sampling of the jerk chicken and an authentic beef patty proved that this was a stand worth stopping at in this thoroughfare.
Also within Grand Central Station is Grand Central Market. In a nutshell, it's a hallway of fresh fruits, vegetables, meats, cheeses, seafood, chocolate, coffee and plenty of other eye-catching items. It's a well-lit smörgåsbord of edibles. Just a walk thru the cool hallway makes your mouth water and demand a sample.
More walking, a few subway rides, some window shopping, and the sun shining down on our heads were all the factors in an equation that required thirst quenching. Yes, ladies and gentlemen, for the first time on DrunkEats beer is the subject matter. 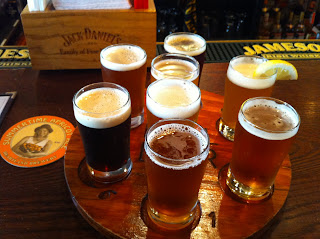 There she is. The Seasonal Voyage. And a voyage it was to consume the eight (8) 5oz glasses of beer. Each glass was a sample of their fresh brews. Starting in the #1 position (see illustration) and working our way counter-clockwise to the #6 position were the following house brews (light to dark):
- Indian River Light
- Cornhusker Lager
- Harvest Wheat Beer
- Indiana Pale Ale
- Red Rooster Ale
- Farmer Jon's Oatmeal Stout
The 2 inside glasses were the Empire Premium Beer and the Summertime Apricot Ale. Typically, I'd be a light beer drinker. The darker it gets, the less likely I'd be to drink it. However, for this epic occasion, a sample of NY's finest brews could only be fitting.
Oddly enough, after some very filling drinks, I was still in the mood to eat. Call me a fat bastard if you want, but I was craving a cheesesteak. And although it's not Pat's (where I would normally eat) or Geno's (what I see some others eat), it's a great alternative without having to travel 99 Miles to Philly.
99 Miles to Philly
94 3rd Avenue (btwn 12th & 13th St.)
New York, NY 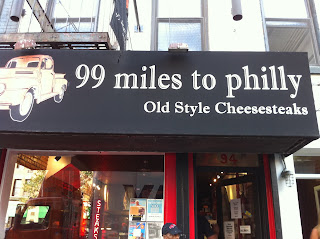 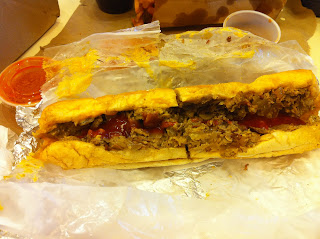 Yes, that's the name of the place. And interestingly enough, it was named that because yes, it is exactly 99 miles to Philadelphia. For a NYC establishment, this was the closest things you could get to an authentic Philly Cheesesteak. The meat was thinly sliced, the bread was fresh, the cheese was melted perfectly with the onions, and the taste was wonderful. It was so enjoyable to sit down to eat a cheesesteak without having to leave the confines of the city. To know that it's just a subway ride away is a great things when there's a particular taste that you are craving. For $7.50, it's very comparable.
To be continued...
Part II: