Sitting in the airport, waiting for my flight, is giving me ample time to think about what transpired this past weekend. It’s not the usual that you find someone flying cross-country two weekends in a row. But that’s just what a jet-setter does, haha. You do what you gotta do for your friends. Congrats to all the soon-to-be husbands and wives of this year, you’ve placed a heavy dent in my wallet!!! But on a serious note, Portland Oregon was an interesting breed of a city. Home of Nike and of course Edward, Jacob, and Bella lol…I was eager to explore the forest land for a possible drunk eats eatery that could feed the inner vampire/werewolf inside of me. Aside from the daytime wedding festivities, 2 nights were left to bond with fellow wedding partakers and the likes of Portland inhabitants dispersed throughout the city.

It just so happened that the groomsman’s brother and crew were already out on the prowl and scavenging the lands for their next victims. So we decided to join in on the bloodbath and shower Portland with some Philly love. Uptown Billiards was the flavor of choice for our pre-wedding bondage, as this would provide a site for some fun games of pool, darts, and excessive drinking. Be sure to keep your eyes peeled wide open, as the entrance to this establishment isn’t well marked. Once the entrance has been found, you’ll find yourself walking up a set of murky steps deeper and deeper into the lion’s den. Atop the steps, your eyes will adjust to the ambient lighting of the cave, resembling the most intimate room in your household lit solely by the fireplace.

With plenty of pool tables to satisfy any scavenger and dartboards to curb your enthusiasm, Uptown Billiards is a grotto you and your friends must check out if you’re ever in the Portland area. The place was spacious and the service was top-notch. Even the bartender had the same name as me, as he hooked all 30 of us up with drinks and food specials galore. Try the Widman Sundown or the Widmer Hefeweizen at a price of $4 to quench that alcoholic thirst of yours. Supplemented with a few Irish car bombs, patron shots, and Remy, you’ll soon realize your 20/20 vision has disseminated to a mere 10/20 and the belligerent obnoxious loud animal within is bouncing off every wall in the joint.

At some point, you’ll pick up the menu sitting in front of you and order whatever your finger points at. A burger seems to be a good choice, but not any ordinary burger. Because the service has been pretty dope at this point, you decide to special order that burger and make your own creation. Medium rare burger, salt, pepper, ketchup, mayo, fried onions with a runny sunny side up on top, hold the lettuce but instead spring mix veggies and a tomato. And no, I’m not kidding. 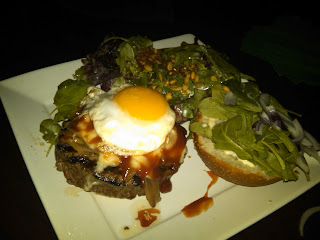 Upon arrival, you wipe that saliva off the corners of your mouth and prepare yourself for a savory drunk eats. One word can describe the taste of your creation…incredible. The juicy meat was cooked at the perfect temperature and the surrounding filaments complete the burger in flawless fashion. All 30 of your occupants will definitely want a piece of your creation, righteously named the Dillinger special. And at the end of the night, you’ll notice that atleast one of your troops in your company has fallen victim to the porcelain ring of death in the lavatory…no names revealed. Closing up shop, good luck finding your way back to your humble abode, as the one-way streets in Portland may deceive you into thinking the opposite. Just be sure when driving that you watch out for one-way signs, parked cars aligned one-way, or even the headlights heading straight for you ready to play chicken. 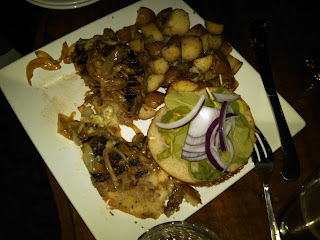 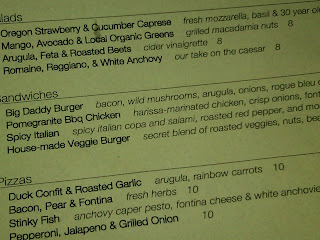 This place left such a good impression, the following night we all decided to hit up the spot again for a second time! The second time around we continued our take over of the dwelling but at a much lesser pace, as the night before and the wedding day festivities drained the life out of us. A few Widmers in, you decide to order another burger to see just how good this place really is. On top of that, I was on a drunkeats mission to satisfy my readings with a juicy read. Big Daddy Burger sounded just right for any dude claiming he’s a big daddy himself. Bacon, wild mushrooms, arugula, onions, and rogue bleu dressing…how can you not turn this down. Perfection. If it wasn’t for my stinginess, I would have given this place a dope 5 out of 5 but instead my consciousness levels it at 4 out of 5. A DrunkEats seal of approval!

[Disclaimer: photos taken do absolutely no justice to the euphoric indulgence] 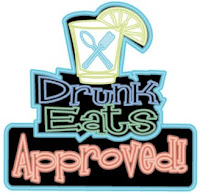 what do you guys think of the DrunkEats seal of approval, still in its beta version? like or dislike?