As you all know, I recently took a trip with my girlfriend out to the Windy City, which interestingly enough was nicknamed not because of the high winds (as most people would think) but because of the politicians who used to talk so much trash that they were considered to be full of hot air and when they spoke people caught wind of it. Anyway... the greatest debate in Chicago (food-wise) is where to get the best deep dish pizza. Now off the top of your head, you might think... Uno's! Nope. We are all familiar with the restaurant chain, but that's not the place to go (even though it originated there).

From what I gathered in the weeks prior to my trip, there are 4 establishments that should seriously be considered. Gino's East. Giordano's. Lou Malnati's. Pizano's.

Of the 4, I was able to try 2. Pizza is very filling in Chicago so you can't go overboard and try it all. By comparison, NY has the thin crust which can double as a snack or a meal (if you eat enough). In any case, on the first night of our stay we tested Gino's East. 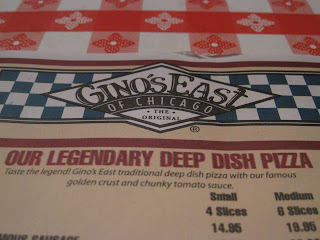 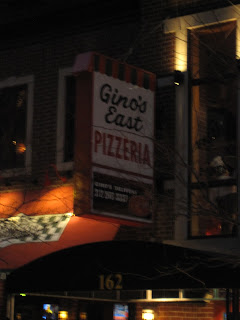 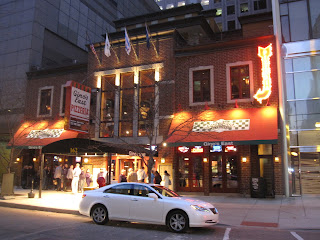 The line was wrapped around the corner as we quickly approach the restaurant to get out of the cold. Upon entering, we were immediately hit with character. What do I mean? The place is covered in people initials, taglines, phrases, sayings, and other forms of "art" on the walls, seats, even the light fixtures. Our waiter was excellent. He asked if we were from out of town, if we needed to know anything about the menu, and even explained to us our options with the pizza. He even told me to take this picture as he was serving the first slice of pizza. 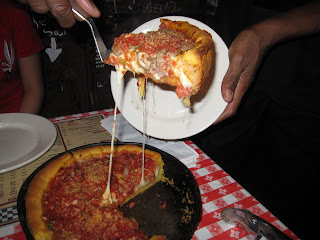 We ordered the Gino's East Supreme, which consists of sausage (crumbled), pepperoni, onions, green peppers, and mushrooms. Fantastic! It was served in the deep dish pan that it was made in, and I think that made a significant difference. I'll get to that later.

The pizza crust was light, flaky and buttery. The temperature of the pizza was hot, but not so hot as to burn the room of your mouth (that's important to me, I have sensitive gums and mouth in general). The pizza was meaty, but not overpowering. I could taste the sausage and pepperoni separately. The onions, green peppers, and mushrooms were all chopped small and you could taste them individually in every bite. I don't think there was one bite that lacked any of the aforementioned items. The tomato sauce was light and fresh. It had great chunks of tomato that weren't too big. And the cheese... well... cheese binds it all together. The gooeyness of it all just completed the pizza. And unlike a NY-style pizza, the cheese is on the bottom and the sauce is on top. You can think of it as an upside-down pizza. I think the best part of it all was that with all the ingredients in this dish, you might think they'd over salt it. However, I was pleasantly surprised that it was not salty for my taste buds at all. Everything seemed to blend together perfectly.

Fast forward to the last evening in Chicago. Now you would think that any other deep dish pizza joint in the city would be just as good as the next. But I assure you, this statement is incorrect. I can seriously see why there is such a debate. 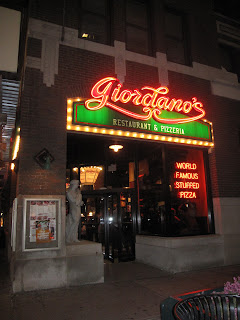 Giordano's! Another fine establishment in the Windy City known for their deep dish pizza. The style here was different. When you walked in, you had the option to pick up or sit down, but whatever it is you chose, you had to place your order ahead of time. And while we waited, we were entertained by the men who made the pizzas. We got to see them fling the pizza dough from one side of the kitchen to the other. Surprisingly, the kitchen was pretty open to the public (obviously blocked off by counters, but it was all visible).

To get the full comparison down, we decided that it was necessary to feel the atmosphere and get the full experience from waiters to food. They took our names and we proceeded to place an order for our deep dish pizza. (All other items are ordered at the table.) Of course, we ordered the Supreme (only fitting to judge the debate). And shortly thereafter, we were seated.

This restaurant seemed slightly bigger than Gino's East. And there seemed to be more families here, as opposed to Gino's where there were many friends and couples (no big deal, just an observation). But I think it's here where our experience started to go a little downhill. Our waitress wasn't as helpful. She took our order without asking us if we had any questions about the menu or wanting to know if we were from out of town or not. Ok, fine. Maybe I'm being picky about the way I'm served. 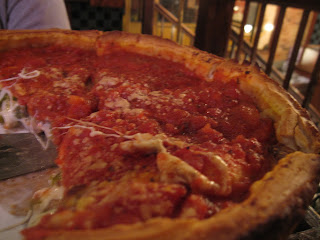 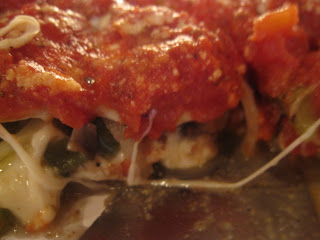 So here is the pizza! Looks pretty good. But here are my takeaways. The pizza was not served in it's cooking pan, the deep dish. It was served on an aluminum serving tray with a piece of cardboard underneath the pizza. I feel like this plays a role in the overall presentation of the food, not to mention the temperature control. I feel like the cast iron deep dish allowed the pizza to stay warm until the very last bite, whereas this pizza out in the open cooled much faster. We didn't even get to the last slices because the crust had hardened along with the cheese which had solidified. (We didn't waste the food though. We gave it to one of the bums on the way back to our hotel.)

Overall, I thought the crust was not as flaky or buttery. I think the toppings were just about the same proportion and you could taste them all individually. I felt that the sauce was a little less savory than Gino's East. It just needed a little more umph! As I took each bite, I really compared it to what my previous pizza meal was. And all together, I didn't enjoy this as much.

There was something about the whole experience at Giordano's that made me feel as if everything was just a process to them. There wasn't the friendliness of the waiters. There wasn't the personalized feel of your own cast iron pan on your table. The pizza overall seemed very boxed / cookie cutter. And the only plus side was that the ambiance was very family oriented, which is always great. I guess that does say something about the quality of the establishment. But the qualities I sought after were not up to the standards I had expected.

In the end...I chose Gino's East. I'd have gone there again, but a man can only eat so much pizza in 4 days. Maybe I'll try the other 2 on a next visit.

We tried so many other restaurants and local cuisine. Stay tuned for those posts to come soon.
Posted by Admin
Email ThisBlogThis!Share to TwitterShare to FacebookShare to Pinterest
Labels: Chicago IL
Newer Post Older Post Home
Tweets by drunkeats