So, though I have never licked my chops in anticipation of Pecan Pie of any sort, I have had an abundance of chances to try a few in a very short time. Previously I tried a Chocolate Pecan from Carlo's Bakery in Hoboken, NJ (rated at 4 shots). The actual tasting occurred during T-Day. Since then I have tried 2 more "plain" Pecan Pies. 1 from Goode Co in Houston, TX and 1 from Carlo's Bakery. Let's review in reverse chronological order...because that's how memory works (laugh now, figure it out when you get home).

Up first...or last is Goode Co. from Houston. How the hell did I get to Houston since my last post you ask? Well, I tell you, men of m y stature have Houston come to them. Damn RIGHT!...Or you could have a strange train of family and friends send one back as carry-on luggage on a plane to be enjoyed by other family and friends on New Years Eve. Clearly, I do not have any stature to speak of. Anyway, unboxed the pie looks tasty as any other. Pecan pies do always have great texture and some sort of drama transpiring on the upper crust, but I digress. I cut myself a small slice and dug in. And I do mean dug.
The pie was not holding together well (whether by design or due to a hard travels and turbulence I do not profess to know...I can only give you the my tasting details. I will say that I highly doubt any pie maker would plan/expect that type of journey). The pecans were properly "glued" together, but the bottom layer (filling?) was similar to refrigerat 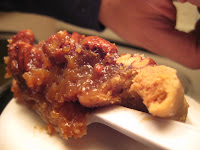 ed strawberry preserves (this is in my fridge...hence the analogy). Relatively thick, goopy and sticky but when tested would not hold up. And by tested I mean moved from main pie to plate, plate to fork and fork to mouth. Don't get me wrong, there ain't nothin' wrong with thick, goopy and sticky (pause) for some. The color of the filling reminds me of the last few chunks of a pancake breakfast that were stewing in syrup for the entirety of the meal and thus, too sweet for me. The pecans were nicely done. Still crunchy and solid and not overly candied. The crust had a pretty heavy aftertaste of flour.

NJ. Once again through my "Soprano's connection" it was delivered in time for Christmas. This pie had the benefit of only being shipped about 8 miles, no altitude sickness to be found. The pie held together like a brick shit-house. The color was darker overall...maybe brown sugar or molasses? I've never made a Pecan Pie, so I can only guess. The top layer of pecans

was solid and crunchy. The filling was once again too sweet for me. However, not nearly as sweet as the Texan. A darker sweetness and less pronounced. Kind of like the caramelized sugar on the bottom of a well made flan. There was a clear separation of church and state as the filling had the consistency of properly thawed ice cream. The crust just sort of disappeared into the flavoring of the pie, which to me is a good thing. With Pecan pie, if you add more flavor, I think it would be too much. Overall, a touch too sweet for me, but clearly a high quality offering.

Winner - Evil, I mean Carlo's. In my opinion a better made and tasting pie (of course as previously mentioned, I do not like overly sweet...) However, neither of these came even CLOSE to the Chocolate Pecan Pie I reviewed previously.
Posted by TheDirtMerchant
Email ThisBlogThis!Share to TwitterShare to FacebookShare to Pinterest
Labels: Hoboken NJ, Houston TX
Newer Post Older Post Home
Tweets by drunkeats