I am fortunate enough to have a lot of friends. Unfortunately, I am unable to visit them all at once. Anyway, I met up with a dope friend at her gym in New York City (yeah,I know, a gym of all places right?). It had been literally 2 years a least since we've last seen each other, but thanks to technology we've been able to keep in touch.
So what better way to catch up than over lunch in the city! Coincidentally, it was also restaurant week. With so many choices we decided to taste a place we've never been to. Yes, taste. Our choice for this episode? Bobby Flay's Mesa Grill . We ended up walking from Crunch on 38th all the way to Mesa Grill. With only a quick break at the Mosex gift shop, we definitely worked up an appetite. 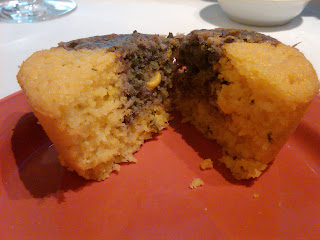 JALAPEÑO + BLUE CORN MUFFINS
Mesa Grill being a Southwestern themed restaurant, you would expect something other than white bread rolls right? Well, don't worry because there were no normal rolls in sight. These muffins were great. They were served warm with a side of butter. The flavor of the jalapeño was there, but none of the heat. The real butter definitely helped, but it was still good without it. 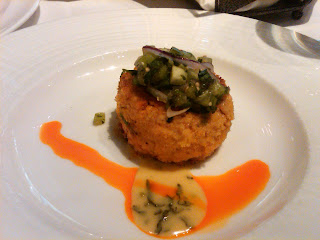 SALMON GRIDDLE CAKE
with Cilantro Vinaigrette + Tomatillo Salsa
Here is the first appetizer of the day! The presentation was spectacular! I almost did not want to cut into it. The tomatillo salsa accented the salmon perfectly. The cilantro vinaigrette was just an added touch. The salmon was moist and flavorful on its own. Of the three appetizers, this comes in right at the middle. It wasn't the best salmon cake I've had, but it was definitely good. 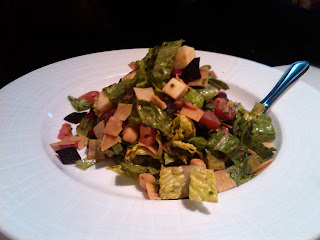 SOPHIE’S CHOPPED SALAD
with Her Own Special Dressing + Crispy Tortillas
Nothing really stood out on this one. Perhaps, I was expecting too much since it's Mesa Grill. Then again, I'm not a salad person. It was good for what it was. Everything tasted fresh. The dressing was good. Of the entire meal this one was probably my least favorite. 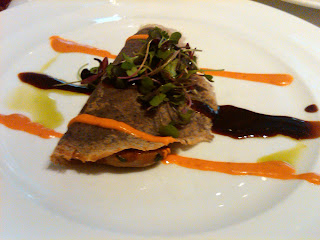 BLUE CORN PANCAKE
filled with Barbecued Duck Habanero Chile-Star Anise Sauce
This was not on the RW menu, but who can resist duck?! The only thing wrong with this appetizer was there weren't two. I'm not a big fan of bbq sauce, but I most certainly did not mind it at all in here. Again, like the corn muffins, there was little to no heat. The flavor of the habanero was present for sure. The duck was perfect. It was moist, tender, delicious, fantastic, and amazing. I know I didn't use enough words. The corn pancake gave a nice texture and flavor to the dish. It was very thin, much like a crepe.

From here on out it only gets better... 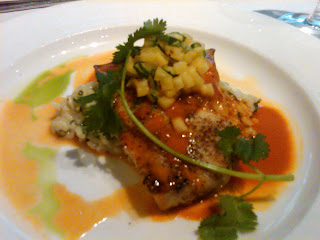 GRILLED MAHI MAHI
with New Mexico Red Curry Sauce + Creamy Green Chile Rice
Delicious. The mahi mahi was grilled perfectly. It flaked with ease. Definitely a very complex dish. I do have to say that the rice was better than the fish. I could probably eat the rice on it's own and be happy. The fish, rice, and sauce all in one bite is the way to go with this dish. 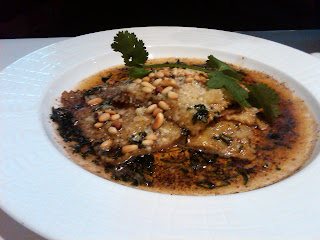 SWEET POTATO RAVIOLI
with Smoked Chiles, Toasted Pine Nuts + Cilantro Brown Butter
As much as a carnivore as I am...this was the best dish I had all day! My mouth is watering just typing about this dish (You can't tell, but I just stopped typing for about 5 minutes just so I could day dream about this dish). The ravioli was tender and drenched in the cilantro brown butter. DRENCHED. I'm not complaining I'm proclaiming! The sweet potatoes texture and was very smooth. It felt like it melted as it hit my tongue. If Awesome had a flavor then it would be this dish. The toasted pine nuts added a delicate crunch. Overall the dish was sweet. I would consider to have this dish for dessert, not because of it's sweetness, but as an excuse to have another serving. Kudos Bobby Flay. 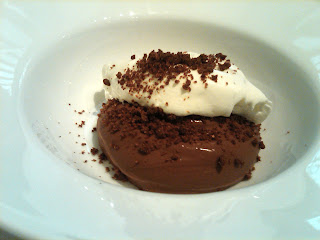 MEXICAN CHOCOLATE PUDDING
with Gingersnap Crumble
Do not let the simplicity of this dish fool you. It packs a little bit of heat that really goes well with the chocolate. The ginger snaps provide a nice texture. The heat from this dish makes it elegant. Two scoops of this would have been perfect as I did not want to share this one. The chocolate was just sweet enough that I did not want or need milk. Since, my friend I ate with is a trainer, I'll leave her name out of this, I'll just say she's so demanDING. After the first taste she said, "the mexican chocolate pudding was like christmas in my mouth." 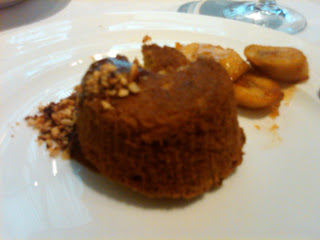 WARM BANANA CAKE
with Caramel + Crushed Peanuts
I got too excited and cut into this piece of awesomeness before I took a picture. First of all I was a bit sad when this dish came because I knew the only thing left to receive from the server would be the check. The banana cake was moist and packed a surprise. As I cut into it, I discovered it was not a banana cake at all. It was a treasure chest filled with a bounty of a peanut sauce! Well it tasted as though it were peanut based. The caramel that was on top had a slight smokiness to it. As if this desert was perfect enough, sautéed banana slices were placed ever so gracefully on the side.

My first meal back in the city was hands down the best yet. Some dishes I could have done without, but they were good nonetheless. Did I mention that my favorite dish was the sweet potato ravioli yet? After eating I became very jealous of the residents who lived across the street. I would definitely recommend this place to anyone at anytime. There's a brunch menu that I will try out one of these days. There's not much more I can say besides, give Mesa Grill a taste! Today's winner...IRON CHEF BOBBY FLAY.
MESA GRILL
102 Fifth Avenue (between 15th & 16th Street)
New York City, NY
212.807.7400
http://www.mesagrill.com/new-york-city-restaurant/