Across the street from Hostel Oriente in Madrid, Spain my friends and I learned of what we thought to be a funny and pride-enducing little snack. We walked into what would be equivalent to a 24-hour quickie mart called Open25 (but much smaller) looking for some agua and a small snack. In the aisle with the brightly packaged crackers, chips, and gum we found chocolate covered cookies called "Filipinos." They come in 3 different varieties of milk chocolate, dark chocolate, and white chocolate. Needless to say, we had to buy a couple. And they weren't that bad... 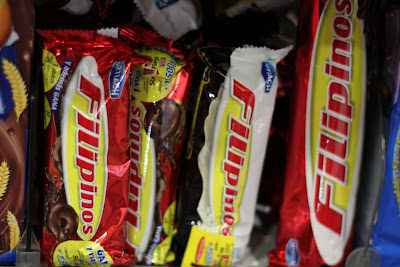 Little did I know, this interesting packaged good caused a good deal of controversy. Here's something I found from Wikipedia on "Filipinos:"

The government of the Philippines filed a diplomatic protest with the government of Spain, the European Commission, and then manufacturer Nabisco Iberia in 1999. The protest took offense with the use of the name "Filipinos", a term which can refer to the people of the Philippines, to market cookie and pretzel snacks and demanded Nabisco stop selling the product until the brand name was changed.[5]

The resolution's author, Philippine Congressman Heherson Alvarez, claimed that the name of the cookie was offensive due to the apparent reference to their color, "dark outside and white inside".[6] His resolution stated "These food items could be appropriately called by any other label, but the manufacturers have chosen our racial identity, and they are now making money out of these food items."[5] On August 26, 1999 Philippine president Joseph Estrada called the brand "an insult".[5]

The protest was filed despite Foreign Secretary Domingo Siazon's initial reluctance on the matter. Siazon had reportedly said "he saw nothing wrong with the use of 'Filipinos' as a brand name, noting Austrians do not complain that small sausages are called 'Vienna sausages.'"[5] 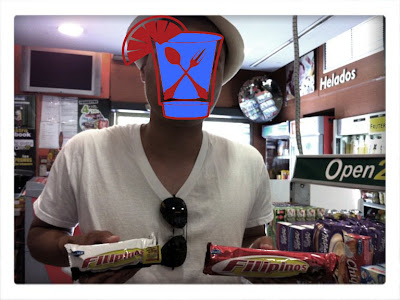