I've lived in the NY/NJ area for all of my life and I've only stopped at a hot dog stand twice. (Gray's Papaya doesn't count; that is an actual store front.) And you know that NYC is known for many things, and the hot dog is one of them. But I was told that when I get to Vancouver, I HAVE to try the Japadog. A what?! Yes, it's exactly what you think. It's a Japanese hot dog. And it's wonderful! 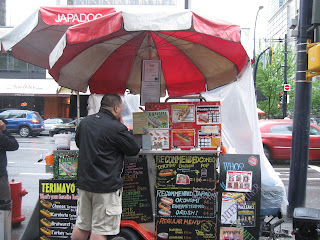 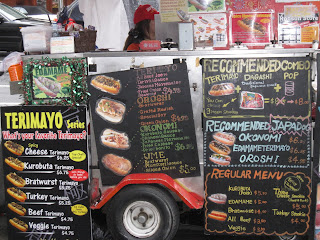 To my surprise, there are a lot of Asian people in Vancouver. And the most prevalent denomination is Japanese. Of course, there are the Viets, the Koreans, Filipinos, and others but there is no other more dominant Asian culture in this NYC-like city than the Japanese.

The first wave of Japanese immigrants to Vancouver were called Issei in 1907. These peoples were the product of poor fishing and farming villages in the southern islands of Japan. Most settled in or near Vancouver on farms in the Fraser Valley and in fishing villages and pulp towns along the Pacific coast. (The Canadien Encyclopedia). Like many minorities in history, they were discriminated against. And it was not until the 1940s that these peoples regained their freedoms and continued to enhance the Vancouver communities instilling their culture and (most importantly to me) their fantastic food.

So here I am on Burrard Street at the Century Plaza Hotel & Spa, and lo and behold, the Japadog stand is only 1.5 blocks away! Lucky us! After a short walk, it's GO time...

The most difficult question I had to ask myself at that point was, which stellar hot dog do I choose? There were so many varieties to select from, but here, on Day 1, was my first choice. 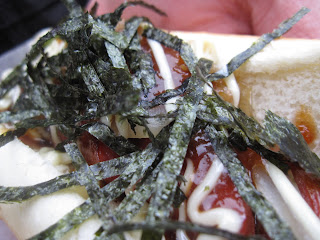 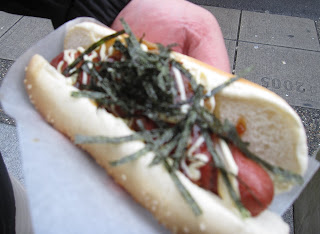 It's a beef frank topped with seaweed, jalapeno and smoked cheese, with Japanese mayo and teriyaki sauce! The first bite is full of snap; the hot dog was cooked to perfection where you get that snap in every bite. The seaweed also provide that crispiness with salty flavor that keeps your mouth watering. And the sweetness of the teriyaki sauce combined with the mayo provide the creaminess you need for a great contrast in textures. 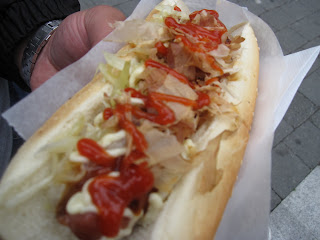 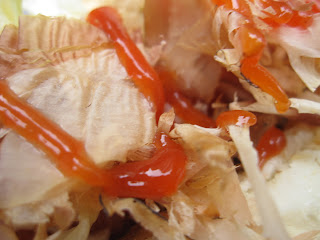 This is a kurobuta (pork) hot dog topped with special Okonomiyaki sauce, Japanese mayo, fried cabbage, and driedBonito flakes. For those of you who don't know what Bonito is, it is a medium-sized fish in the Mackerel family. It's quite an odd combination of pork, fish, and cabbage but just think of it like putting salt and pepper on your hot dog.

Those Japanese people, they love their culture. And it shows in their food. What was once considered to be an American food icon, is now the base to a cultural development. (Anecdote: I was reminded about how I enjoyed watching Throwdown with Bobby Flay where his competitor topped his hot dog with mac and cheese.)

Anyway, too much ranting going on here... 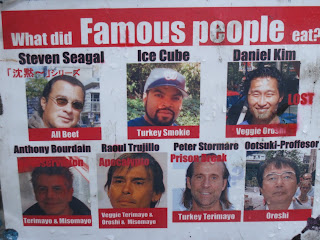 Anthony Bourdain...sir, I will have to try the Misomayo Dog at a later date. However, I agree with you on the Terimayo! I hope to cross paths with you one day at the corner of Burrard and Smithe to enjoy another JAPADOG!