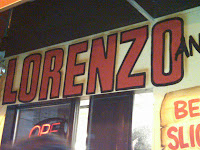 Ask any Philadelphian where to find the best pizza in town and most likely you’ll start to hear the same word being repeated multiple times. Lorenzo’s has long been the gold standard for drunk eats at any time of the day, whether it be 12 noon or past 2am. There’s something pleasantly charming about taking a stroll down South Street and scarfing down a slice of Lorenzo’s while absorbing the sights and sounds of an eclectic atmosphere. Voted as the Best Pizza in Philadelphia Style Magazine, this dwelling has the power to satisfy that growling stomach so richly saturated with birthday cake shots and Heinekens at 2 o’clock in the morning. 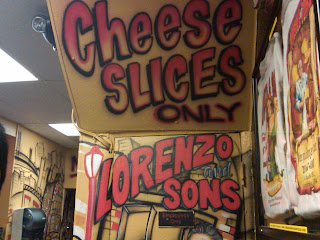 Waiting in line is a spectacle of its own. A testament of its glory can easily be seen right underneath your feet, as you discover yourself in a sea of white paper plates. Enter the hollow and mesmerize yourself with its narrow passageway covered with graffiti-like wall scriptures. A brush of heat smothers the room with every opening and closing of its oven doors. Only one way to order here…cheese pizza for $2.75!!! A steal if you ask me. What makes this one truly special specimen is its rich ingredients of cheese and dough, and the accents of tomato sauce hypnotic to your senses. And not to mention, the slices are humungous!!! 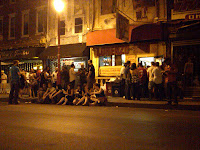 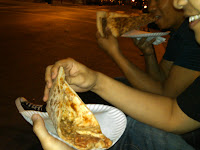 One small detail missing from making this establishment complete, is a seating area to rest those burning feet that ripped up the dance floor a couple hours earlier. But who really needs a seating area to rest those aching feet when you have the sidewalk curb at your disposal haha!!! On this particular night, however, the dance floor actually got the best of me and instead I ended up consuming a large quantity at the bar after watching the Flyers lose game two of the Stanley Cup Finals. 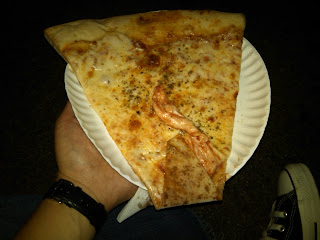 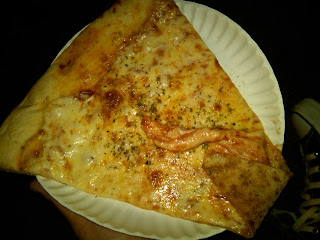 And to make matters a little more interesting, one of my homies spent most of the night with his head elmer-glued to the floor searching relentlessly for his drivers license…Relief struck an hour later when the bartender, who might I add was wearing an off-the-shoulder Flyers Dressy Tee (hot damn!), approached me with a smile on her face, a twinkle in her eyes, and a drivers license in hand...

Apologies for deviating off the beaten path, but what is Drunkeats without a Drunkeats story to go along with it! I guess I’m the type of person that finds the simple pleasures in transforming a regular mundane occurrence into an extravagant adventure…makes for a little more interesting read if you know what I’m saying haha! I thought all bloggers do that, no? lol

So before I recite the Spanish Inquisition, let me just say that the pictures taken don’t really do any justice to this one stop pizza shop…for the obvious limitations of a mobile camera phone or lack there of. With that said, I encourage all you drunkards and drunkless to taste the heavenly joys of Lorenzo’s pizza…