As I sit on this plane ride headed cross-country to the land of Bill Walton and Clyde the glide Drexler, I envy the guy sitting next to me with an iPad. So I decided to break out the Macbook Pro and battle the tech savvy 30,000 feet above ground level. He can probably see what I’m typing right about now but oh well…he won’t wanna mess with a drunk eats...

Philly’s known for one thing, and one thing only…the greasy cheesesteak! If you’re an out-of-towner, then of course you’ll be magnetically drawn towards the usual touristy hot spots of Pats, Genos, and all of their gaudy lights that make Christmas look like the fourth of July. And to add the cherry on top, tourists are hoping that they’ll catch a glimpse of a celebrity or a sports star to add to their vacation recap they plan on telling their grandkids. But if you’re a local like me, then you’ve outgrown the bells and whistles of Pats and Genos, and you’re a little more adventurous to find hidden gems scattered throughout the city.

After meeting up with the godfather of Drunk Eats @ Lucy’s Hat Shop in good ole Olde bulletproof City and trying to skip the line @ Z-bar, we were determined to get our drunk eats on! It’s always a beautiful thing when 2 bloggers can meet up and share the experience together, no homo. So we decided to venture out of our comfort zones and hit up a spot that kept replaying in our ears all night, “Philips, Philips!”…just like that ringing noise you hear right after you get bitch slapped in both ears at the same time..not that that has happened to me before but go ahead and try it to yourself. 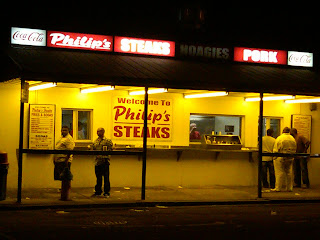 The buzz started to settle in so I was more than willing to take a cab ride over to this so-called Pats-killer. With the yellowish tint and a set-up that resembled Pats, the humbling sign read “Welcome to Philip’s Steaks”. Hmmm I wasn’t too convinced just yet. Waiting in line was a struggle I have to admit, especially in a shady and suspect area late at night. When you’re pounding down $3 miller lights in one hand, Jack and coke in another, and a couple shots with your own two feet, all you can think of is satisfying that growling beast underneath your chest that yells out “open your mind” (scene from Total Recall). 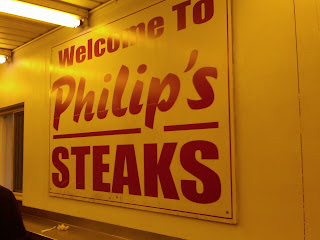 “Whiz-wit please”…I receive this Thing in my hand. I think this Thing was a slab of steak surrounded by a hoagie roll smothered in cheese whiz. By appearance I was a little concerned. The meat wasn’t chopped up and I wasn’t really feelin’ the way the whole Thing was put together. I’m sure by the time we got back to the hotel, this Thing would have fallen apart.

Taxi please! I was ready to devour this Thing in my mouth…my taste buds were screaming for help. Mind you, we were in a place far from center city civilization and cabs would appear from a distance every few minutes. Waving down a cab took ages! We were literally running across the street trying to chase one down. And finally we did. Off to the hotel with Thing in hand. 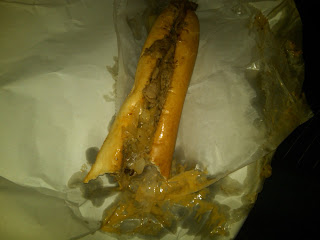 Nom nom nom…not quite. For some odd reason I was wincing while I was chomping. Doesn’t really compare to Jim’s or even Pat’s for that matter. I wasn’t impressed. I enjoyed blowin’ up spots better than I enjoyed munching this Thing. side note: my bad for blowin’ up your spot, it’s what I do when I’m semi-drunk, you know who you are. The meat was THE issue for me. It needed more chopping. I could pinch a piece off with two fingers and wave it above my tilted head 2 feet high and still touch my mouth with it. Well, maybe not 2 feet but I felt like the dog in The Sandlot...for-ev-errrrrr. Throw me a freakin’ slab of meat why don’t cha! Haha. 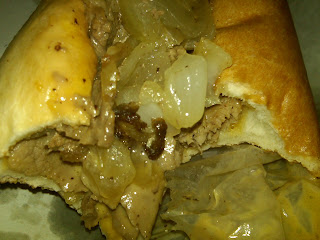 So to sum up this spot, ehhhhh. Didn’t quite impress. It might have just been an off night for the chefs, when the steaks weren’t quite cooked for satisfaction...but the yelp reviews didn't quite live up to my expectations. Maybe if my drunkenness brings me back to this joint, my observations will be different and the stars will be better in line. But until then, if you want a cheeseslab hit up Philip’s…as I’m sure you’ll be satisfied. Ha!