Crossing the border can be overwhelming sometimes, especially if you’re crossing it with 11 rowdy dudes ready to wreak havoc on soil that screams out “anything goes”. I have to admit, a rush of anxiety swept through as we were questioned by the patrol officer eyeing us down. What made matters a little worse is the fact that we loaded up on alcohol at Duty-Free right before. Couldn’t turn down a special of 2 for $25 of crown royal!

But all was good and we were ready and willing to embark on a man journey that would involve the usual Bachelor party shenanigans. Of course, traveling up to Canada on a 9-hour road trip cramped up in minivans called for frequent rest stops and the conversion of these areas into full-blown tailgate parties. Youknowhowwedo!

Once we tiptoed our way across the border, the rest of the trip was a “blur” to me. So for all you readers and religious followers out there, I will have to cut the journey short right here. As the saying goes, “what happens in Canada, stays in Canada eh”.

But before I do you wrong and leave you DrunkEaters with a cliffhanger, I must share with you a snippet of why I’m actually writing this entry, it’s the least I can do... 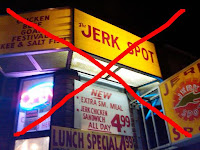 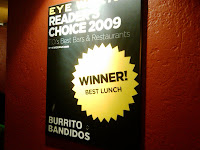 I was a determined soul blogger ready to search for the illest drunkeats spot in Toronto and what I came up with was a tiny hole in the wall establishment that could have been mistaken for something else due to the huge towering sign above it entitled, The Jerk Spot. 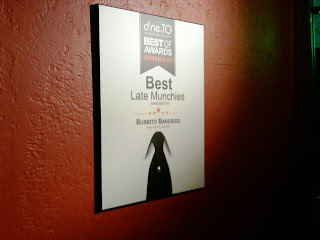 But no, this joint was in the basement. With just a few steps down, you’ll find yourself squeezed in a tiny crevice with low ceilings and a bunch of belligerent suckers. Labeled as Toronto’s best burrito and the best Late Munchies of 2009/2010 by dine.TO, I decided to roll with a chicken burrito size LARGE, all for just 7.08 “loonies” (equivalent to $6.84). And yes, I was in such a drunkeats state that I ordered everything on it…that included Mexican rice, Jalapenos, tomatoes, guacamole, green peppers, lettuce, refried beans, green onions, cheese, and burrito sauce. Disgusting right?!? WRONG. I was completely blown away with the juiciness and satisfying taste! Amazing. 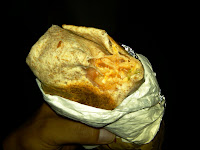 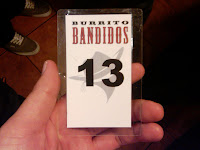 It wasn’t a good burrito…it was a DAMN good burrito. So DAMN good that I just had to come back the following night!!! What makes this so special is the juicy combination of all ingredients that leave your mouth wanting more. With a little bit of spice, the burrito will kick start that dying adrenaline you left behind at the bar. It definitely "feels so good when it hits the lips", as Frank the Tank would say. Located in the perfect spot next to all Toronto clubs, you’re bound to strike up a conversation with at least one person itching to take a “bite of your burrito”…that’s what she said. Other available munchies include bean & cheese, steak, pulled pork, vegetarian, shrimp, and halibut burritos…and the usual quesadiLLa choices of cheese, chicken, steak, pulled pork, vegetarian, and shrimp. 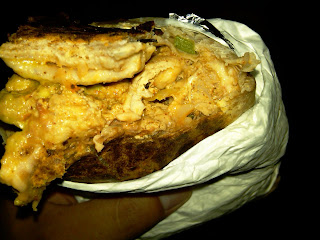 Upon ordering lucky number 13, taking a few scrumptious and healthy bites, and rapidly escaping the cesspool, you’ll be completely in a daze and state of confusion with all the raucous going on outside. You might even find yourself watching a fight break out with a bunch of 18 year old young bucks ready to curb stomp the s%*! out of a helpless dude already knocked the f*$# out on the ground. 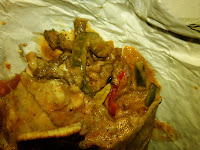 Apologies for the obscenities, but it’s the only way to gauge my state of trauma as I watched all this unfold before my eyes. somebody call the Cavalry!

This is definitely a worthy spot to enjoy one of Toronto’s best burritos after a night of sin. Who knows, maybe you’ll catch a fight night eh!