On the eve of summer, that hunger starts to settle in a little sooner than expected. The increased temperature and heat index tends to make even the best of us perspire and sweat out what we had consumed earlier that day. Quite nasty if you ask me but that’s the reality of the situation. And it’s only May, just imagine what it would be like come July and August…

So after catching the tail end of a pub crawl to wish one of my boys farewell, it became apparent to me that the festivities wouldn’t be complete without the pure satisfaction of what Philly was best known for, the cheesesteak!

Now at this point you’re at a crossroad. You’ve just walked out of the bar in a daze and you’re huddled around in a circle staring at each other looking like bobble heads that dance on your car dashboard. Indecision starts to kick in and soon you’ll be stuck in a friendly argument that could either end with laughs or fuming smoke spewing out of your ears. The slurring speech will continue and none of you will be remotely coherent. After a few minutes or so go by, the decision to grab a cheesesteak will be made. But again, you’ll be stuck with another dilemma…where to go. Since the cheesesteak is the staple food of Philly, you can practically find one on every corner of the city. But at this hour of the night, your options are very limited.

On the one hand you have Jim’s, but on the other hand you have Pat’s or Geno’s. So again, that puzzled look starts to resonate and your stuck asking the tourists of the group where they’d wanna go. The obvious choice will soon be made…Pat’s and Geno’s.

Located in the heart of south Philly, the flashing lights and mob scene will soon trick your mind into thinking you’re in a rap video. On this particular night, several members of your entourage will start to bust out a few verses, stare into an imaginary video camera, and heckle at the surrounding celebrity lookalikes…if that’s what your mind is thinking at the time. Pat’s has established its reputation worldwide, so you continue to stand in line. There’s only two ways to order once you’re up to bat… 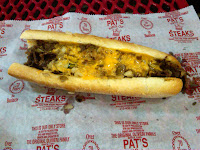 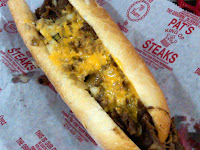 Once the ordered has been placed, within seconds you’ll have what you asked for in your hand. In this state of mind, you’re in complete amazement and decide to tap the person in front of you on the shoulder. What you say to them you won’t even remember so it’s not really important to state here. 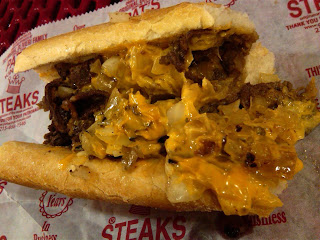 A few steps further, you’ll find yourself in another line…the line for drinks. I always get Cherry Pepsi. You turn around and add a few condiments of your liking…a choice of ketchup, mustard, peppers, etc…

Once you go to town on the cheesesteak, you’ll look up at each other and say, WTF did I just do? But its all good, because now your hunger has been fed with all the cholesterol it needs to survive the next few winters…lol the next thing you know your passed out on the couch with a huge smile on your face. And this is where the night ends. As far as what happens the next morning...well, let's leave that to your imagination!!!