The BEST Chocolate Milkshake We've EVER Had... 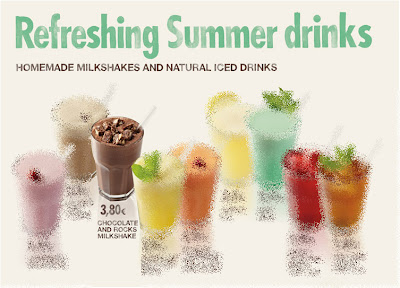 Oh I wish I had taken a picture of this milkshake, but I never thought anything of it. This was a total surprise and completely found by accident!

We had been on the beach in Barcelona for a short time taking in the sights and sun. The water was pretty cold for the middle of the summer, but not cold enough to avoid. In the distance we could see dark clouds moving our way and hear the thunder to accompany it. The thoughts of where we would take cover started to emerge. As we started to pick up and leave, the rain started to come down. Looking again out to the distance, we could see that this cloud would just pass. We found a nearby tree in front of a few shops / eateries that lined the beach and took cover. Like many others, we were trying to wait out the rain. Not realizing that we hadn't eaten lunch yet, hunger and thirst started to kick in.

We decided to step into the little store front of Buenas Migas Foccaceria. A small bowl of pasta or a slice of pizza was necessary to just quench our hunger pains. And of course, a drink would be necessary. I ordered a standard (for me) bottle of water. And my girlfriend ordered what she was craving for...a chocolate milkshake.

Oh what a milkshake it was! The look on her face was priceless. The vocal reaction was just as intriguing. Immediately, the shake was deemed to be the "best" she's ever had. Why? I had to find out, so I took a sip. Amazing! So chocolate-y, so smooth. But wait, chocolate shavings and chunks?! Yes! Was it just one type of chocolate? I don't think so, but I can't be sure. I believe there was more than one type of chocolate in there. Maybe that foreign chocolate had something to do with the great flavor.

The sweetness was not overpowering. The liquid's thickness was not choking. The mix of texture was varied and kept every sip / spoonful different, yet similar?

Put together, the shake was perfect. No joke, no lie. I don't think we can ever find something similar to that anywhere. In fact, in the past weeks / months since our trip to Barcelona, it has been a failure to find anything nearly as good as what we had in Barcelona.