So here’s the deal, this is the 2nd year in a row that I took a road trip to North Carolina & South Carolina and admittedly in round one I overdid it with the BBQ, to the point that I may or may not have had food poisoning as a result of it. This time around, it was spaced out and I was prepared for the assault on the taste buds. 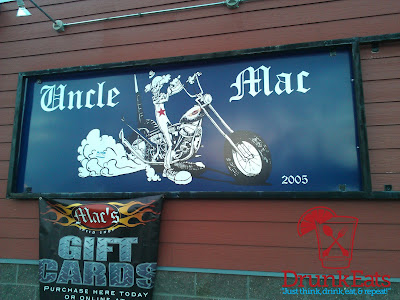 I came here for the billing – Beer, Bikes, & BBQ – and the review – “…best brisket I’ve ever had” from BBQ America. Mac’s lived up to its billing, 30 spots for bikes in the parking lot and pickup trucks galore. The walls were adorned with over 50 beer taps decorating the walls and a robust 100+ beers available to sample and the strong scent of wood smoke drifting through the dining room.

We started simple, five beer shots for $8 and a basket of Tabasco Fried Pickles (half price during happy hour). Try the somewhat mis-leading Death by Hops; pure and smooth, not anything like you’d think with minimal aftershock. After the pickles cooled down, I still got a shot of life from the batter mixed with Tabasco. 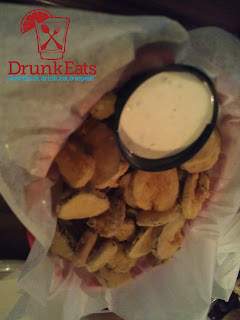 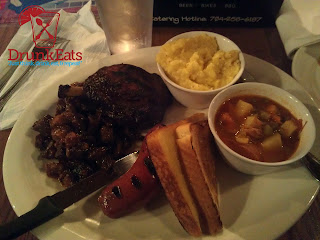 I know buffalos had wings but pigs surprised me; the Smoked Pork Wing is really a Smoked Pork Shank finished in Mac’s BBQ Sauce which served as very ample topping to the rich flavors of two parts meat and one part wood smoke which prevailed over the entire plate. The Beef Sausage & Chopped Brisket were pulled and chopped as expected, but lacked an overall tenderness that hinted at over exposure in the smoker. 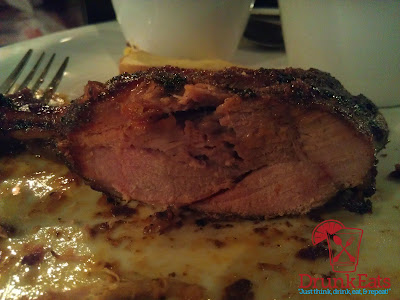 The Brunswick Stew held its own on the plate, but the maximum effect of the Cheese Grits was achieved by mixing with the chopped brisket – quickly salivate over this: a nicely mashed smoked ham & cheese sandwich laced with barbecue sauce. 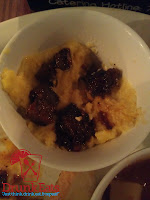 I did not partake in the dessert menu which featured three kinds of pudding and a very tempting Whiskey Cheesecake, but judging by the portion size I don’t think you can argue. Details were not requested but I’ll leave the FATBOY CHALLENGE to the pros – 5 pounds of sausage, brisket, chicken, pulled pork, bacon, & onion rings with a side of mac & cheese and liter of beer. It’s an un-timed challenge that ominously announces its presence by its blank board of conquerors at the front door.

Mac's deserves a 4 here for ambiance, but the over-imposing wood flavor ends up overshadowing the overall meal. Stay tuned for Part II, the best ribs I've ever had...